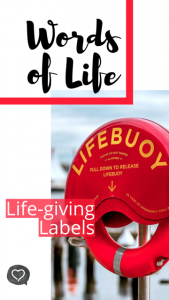 When the extraordinary trials of life come and we feel like the ship could sink, encouragement is vital.  Sometimes words of life can be the life preserver that can help carry us through the darkest times.

When our daughter Melody was born she was immediately labeled, “incompatible with life”.  It is a dehumanizing term that can carry with it significant lethal consequences.  She was sent home on hospice with no hope given for our little girl.  We were told by everyone in the medical community that she would die.  Everyone, that is, except Dr. S.  When Melody came home from the hospital we took her to a family practice doctor.  Dr. S. looked Melody over, was taken with how cute she was and was not afraid to express it.  He used her name (thereby infusing humanity back into a dehumanizing label).  Then he looked me in the eye and assessed, “You never know, she just might be one of the survivors.”  I thought to myself, either he does not understand what Trisomy 18 is or that was from the Lord.  To this day, seven years later, I still well up with tears when I think about that.  What was so powerful about his pronouncement?  He was the first and only one in the medical community to speak words of life about our little girl.

The importance of using words of life is not limited to children who are labeled with a genetic issue.  We live in a culture that speaks words of death to children in an unprecedented way.  It is everywhere.  We need to be like Dr. S. and pour into their lives words of life and watch them grow into all that God intends for them.

One evening in our Tree of Life class we were watching the video in which Gary discusses the power of names we use for our children.  We had a mom and dad in the class who had both been raised with the GKGW principles.  Christy, the oldest daughter of nine children, shared about how her dad referred to her as his “effervescent one”.  Her dad went to be with the Lord when she was 28 years old.  The look in her eyes as she recalled this memory spoke volumes.  Clearly it carried significance for her that shaped who she became.  Her husband noted affectionately, “She is still effervescent.”

Being one of the older ones in her family of nine children, Christy did much serving to help with her younger siblings.  Yet, she genuinely expressed that she did not mind it at all because her dad validated what she was doing with his gratitude.

Christy’s husband Matthew, one of eight children, was called “H.W.” by his father because his dad observed that he was a hard worker.  Notes would show up from his dad expressing how proud he was of Matthew.  That encouraged Matthew to grow into all that God had for him.  He started working part-time at a company when he was 14 years old.  He is still with this company and very successful at what he does.  He is diligent in his work and with his family life.  He has indeed lived up to his name.

We heard a story from a family with seven children who learned an invaluable lesson on the power of words of life.  There was a season in their family where they took in a cousin who was six years old.  He was a challenging child and was a trial to their youngest son in particular.  At one point the dad told his son that when he got home from work each evening he wanted to hear one positive report about this young boy.  The son was reluctant and at first could not come up with anything.  The father persisted.  Then the son started to see little things and praised the cousin for those things in front of the whole family.  The cousin’s whole demeanor would change when he was praised.  He received the words of life and rose to the higher ground. These two boys became close friends and this exercise in speaking words of life significantly shaped who both young men became.

We never know what life holds.  We had no idea when our children were little that Melody would enter the scene of our family one day.  Reflecting back we can see how the principles in GKGW helped prepare us for what lie ahead.  Sometimes the deep stresses of life can bring separation and distance in families.  By the mercy and grace of God, we have only grown closer as a family since Melody has joined us.  We are thankful that prior to Melody coming along we had established some of the principles we learned in GKGW like elevating the good, filling our children’s moral warehouse, getting to their hearts, etc.

We live in a highly distractible world.  It is easy to let the distractions lure us away from investing in our children’s hearts.  I encourage all moms to take the high road, to be diligent in applying Biblical principles, to invest in your children’s hearts, to give them the time and focused attention they crave, to encourage them, to disciple them, and to speak words of life.  You will never regret making them a priority.

Jennifer Thenhaus has been married to Andrew for 22 years. They have five wonderful children ranging in age from twenty years old down to seven. They started teaching classes 18 years ago. Jennifer organized and hosted a Mom2Mom group for ten years. When her fifth child, Melody, was born with Trisomy 18 she had to take three years off from classes and Mom2Mom. She has been back in the ministry for a few years with the added perspective of having little Melody.  Read more of Melody’s story at www.Melodysstory.com