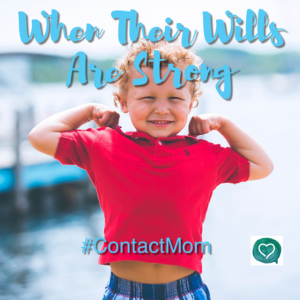 You will never, ever hear me say, “If the child is hungry, he will eat.”  While this may be true of most children, this is rarely true of a strong-willed child.  How do I know?  Because I had one.  Well, I have one, but now he is an adult.  And even as an adult he does not often enjoy eating.  But I digress.

When my son was 10 months old, he clamped his mouth shut and refused to eat.  He planted himself that day and the next 3-4 years were a constant, daily battle between him and me over eating food.  It did not matter to him that not eating was actually harmful.  He had made up his mind and there was nothing I could say or do that was going to change his mind.

Tricia McDonald is the wife of SGM(ret) McDonald and four adult children.  She is learning to adjust to civilian life now that her husband has retired.  She is also learning to adjust to life without homeschooling, as all of her children have graduated.  Tricia volunteers her time teaching U.S. History to local homeschooled high schoolers, and coordinating music for a local semi-professional youth theatre.  She enjoys blogging from time and time and is trying to figure out what she should be when she grows up.  She wants to encourage all the young moms to hang in there and enjoy the moments, as they will pass far more quickly than you ever thought possible.