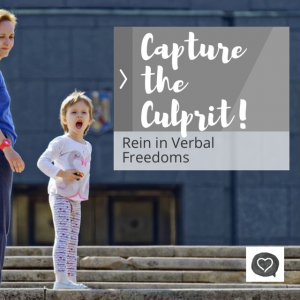 How do you rein in verbal freedoms in your child?  Consider these practical steps:

“…for his mouth speaks from that which fills his heart.” Luke 6:45

Listen closely to what and how your child speaks to you and others. This will give you insight into his thoughts and motivations. You must pay attention if you are to identify areas that require heart training and correction. Verbal freedoms can be very subtle and require that parents listen with full attention. This may necessitate eliminating distractions so you can listen intentionally. When I was a young mom, I would listen to the news or sermons while I did housework and other mindless tasks. As my babies became toddlers and preschoolers, I had to curb this habit so that I could always have one ear on what they were saying. In today’s world of technology we have more audio clutter than ever. We may need to silence our phones, podcasts, audiobooks, radios etc. so that we can make listening to our children a priority.

Do not answer a fool according to his folly,  Or you will also be like him. Proverbs 26:4

As always, we can turn to the Scriptures to give us wisdom in training our children. Our children aren’t necessarily fools, but they are foolish. As such, we can certainly learn from this verse how to answer, or rather NOT answer them when they speak beyond their wisdom.

To answer “according to his folly” in this context is to answer the child in such a way as to reinforce his sin rather than correct it. How do we do this?

Answer a fool as his folly deserves, that he not be wise in his own eyes. Proverbs 26:5

We should answer a child’s foolish words with biblical wisdom. We need to bring him back under the parent’s authority when he uses verbal freedoms to over-step the boundaries. We accomplish this by:

Once you have identified verbal freedoms that characterize your child, you can begin to work on them.

Telling and not asking permission

As my friend began to bring her son’s verbal freedoms back under control, she began to see his tantrums lessen and his need for correction also decreased.

Keeping our children inside the funnel is important.  As parents we must pay close attention to words as well as actions if we truly wish to reach our children’s hearts.

Beth Ann Plumberg and her recently retired husband, Chuck, have 4 wonderful sons, 4 beautiful daughters-in-love and 5 adorable grandchildren. They have been married for 37 years and have taught parenting classes since 1993.