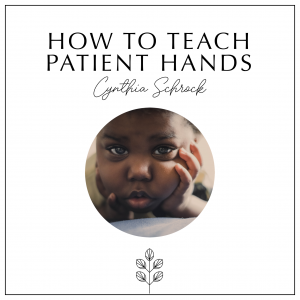 Are boundaries really necessary for children? Most parents would give a resounding, YES!! How to implement those boundaries, though, can be the dilemma.

When my son was two years old, he had a habit of grabbing everything he could see and get his hands on. My son had a severe visual deficit at the time and we didn’t know it. He would stand directly in front of the television and because of his close proximity to the TV, he would also start playing with the stereo. At the time we had one of those now “old fashioned” 100 CD holders. He would open the door to that and proceed to take out every CD and toss them everywhere. We would move him back and sit him on a blanket just to have him get up again close to the TV and then the CDs would start flying everywhere. As I am writing this I am giggling to myself, but at the time it was not funny but very frustrating. My daughter, on the other hand, was a very compliant child.  We would tell her to stop a certain behavior and she would stop. Now I was dealing with a boy who was pushing every boundary I would implement. I knew this was the time to start using a wonderful tool in the Growing Kids God’s Way tool box: folding of the hands.

When we first started training him to fold his hands, my son wouldn’t do it or wouldn’t keep his hands together.  The excess freedoms he already had made him resistant to newly assigned boundaries. Most children who have tasted freedoms that don’t belong to them will buck against the system when those freedoms are taken away and boundaries are being reset. This is when we, as parents, have to understand consistency is the key when setting boundaries. So, I started wondering what I could do to get him to understand and submit to folding his hands. I have always loved the Fruit of the Spirit: Love, Joy, Peace, Patience, Kindness, Goodness, Gentleness, Faithfulness and Self-Control. So I looked over these and asked the Lord which one would apply the most to folding of the hands. I felt like He highlighted Patience to me. So instead of just telling my son to fold his hands, I would hold his hands together and say “Patient Hands”. Attaching the fruit of Patience to folding hands caused something to click not only in his head, but also in his heart. I thought, WOW!! What if I start attaching each of the fruits to boundaries?  Would that bring a better understanding? It did for both of my children. When we would go to the grocery store and my son would start reaching for whatever he could get his hands on, I would say, “Please have patient hands,” and he would fold his hands. Then I would say, “We need to be kind to all the grocery workers who work so hard to keep the shelves neat.” What a difference it made attaching each of these “fruit” or “virtues” to actions. I had friends at the time start using “patient hands” with their own children and the testimonies were amazing.

One year later when my son was 3, we had his eyes tested and found out that he had a severe visual deficit due to his prematurity. This is why he would always get up and stand close to the TV. I share this part of the story because I want all parents to understand a very important lesson that will bring a lot of peace to your life.  Even though my child had a deficit, it didn’t keep me from setting boundaries. I understood that if I gave my son complete freedom because I felt sorry for him, it would only hurt him in the future. If you are reading this and your child has any deficit of any sort, please do them a favor and set boundaries because the fruit you will reap later will be a blessing. My son is now 22 years old and he is one of the most patient people I know. I look back and think that teaching him “patient hands” when he was two had a lasting effect in his heart to this day.