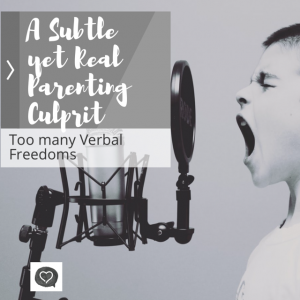 A young mom once contacted me for advice about the recurring tantrums her 3 1/2 year old was throwing.  Almost every time he received a consequence for some misdeed, he would have a meltdown. We arranged to spend some time together to see if I could help her figure out why this was happening. This little guy was talkative, charming, and sweet. He was precocious in both knowledge and language development. Mom had been working on the principle of first-time obedience and her son came to the call of his name with a “Yes, Mommy, coming,” about 60-70% of the time. As a stay-at-home mom, she regularly spent time teaching and training her son and his siblings. What we discovered after some time together was that her talkative son was outside the funnel* in mainly one area: verbal freedoms.

Frequently using phrases such as…

Other verbal freedom include:

In most if not all of his communication, my little friend was very pleasant and engaging. His tone was rarely argumentative even when he was talking back. His reasonable tone made it difficult at times to identify the exact problem with what he said.

How can too many verbal freedoms lead to tantrums?

Children under 5 are not mature enough to distinguish between moral and non-moral choices or ideas. When they are allowed the freedom to speak, do, or choose as they please in one area, they assume they are wise enough to do so in any area. Such freedom is beyond their developmental maturity and leads the child to have an erroneous confidence in himself and his own knowledge. The biblical term for this is being “wise in one’s own eyes.” A child who thinks more highly of himself than he ought will often respond in anger when crossed. Too much freedom, verbal or otherwise, keeps the child from recognizing his parents’ authority over his choices and can lead to tantrums when he disagrees with Mom or Dad’s decisions.

Do you have a child who has too many verbal freedoms?  Are you now recognizing some areas where your child has been subtly challenging your authority through his speech?  In part two of this blog, we’ll look at how to correct this problem.

*If you are unfamiliar with the concept of “the funnel” check out these blogs:

Beth Ann Plumberg and her recently retired husband, Chuck, have 4 wonderful sons, 4 beautiful daughters-in-love and 5 adorable grandchildren. They have been married for 37 years and have taught parenting classes since 1993.