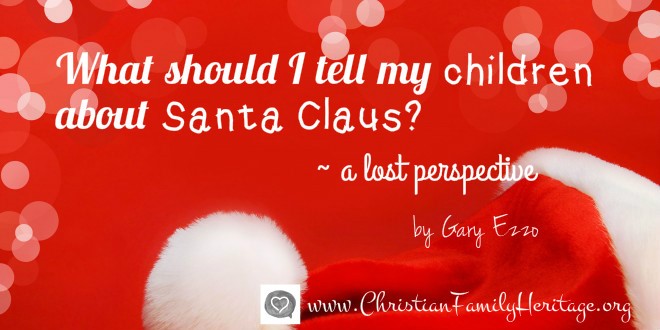 Stepping back forty years, Christian communities welcomed the holiday charm and “make-believe” role that Santa Claus played in the imagination of children. Children loved the mystical notion attached to the jolly-old-man in red the suit. Where does he come from, how does he know the names of all the children in the world? How does he carry all those toys in his sleigh? For the parents of that age, Santa was but an accent mark on Christmas, representing all that was good about the season: unconditional love, sacrificial gift giving, and the ability to stir the imagination, with his limitless charity and mobility.

Today however, we live in a society publicly opposed to the display and truth belonging to Christmas. As a result, many of the treasured icons of the holiday season have also become suspect or have lost their value all together. That is where things stand right now. Today the question is often asked, “Where does Santa fit in the Christmas story?”

As we move closer to the holiday season the legitimacy and or necessity of Santa Claus will again stir conversations within the Christian community. Two concerns are usually at the heart of these exchanges. The first is the charge that parents who propagate the fantasy of Santa Claus cause their children to think of Jesus as a fantasy. And we would agree that is a possibility, but only for those parents who make Jesus a topic of interest twice a year – Easter and Christmas. It seems apparent that the true meaning of Christmas is rarely lost on children who know the reality of Jesus throughout the year. These children have little difficulty separating the reality of the season from the fantasy of any holiday character, whether it be Santa Claus or the Muppets of Sesame Street.

The second concern has to do with the propriety of supporting a make-believe character. Can it be done without compromising truth? Are you lying to your children when telling them something is true, when it is only make believe? As it relates to Santa Claus, parents must decide what truth is being propagated and what untruth must be guarded against. The truth is, Santa Claus represents the “spirit” of Christmas–gift giving and unconditional love. Keeping that truth in front of children aides, not hinders, the real meaning of Christmas: i.e. God’s gift to mankind, and a Savior is born (Luke 2:11). To propagate the person of Santa Claus without the message his character represents is where parents get themselves into trouble.

We believe it is important to preserve the innocence of a child’s “good” imagination and the fun fantasies that support it. However, parents must do so without compromising any specific truth. Here are some responses to consider when your child asks you about the reality of Santa.

Second, parents, when faced with the “Santa Claus existence” question, might also consider asking a few questions, while always being sensitive to the child’s response. For example, a parent might ask, “Do you think reindeer really know how to fly?” “Do you believe Santa can fit through our chimney?” And if you don’t have a chimney, you can ask, “How do you suppose Santa gets in our house?” Of course parents can also ask direct questions such as: “Do you think Santa brings toys to you or do you think Mommy and Daddy are the ones who put gifts under the tree?” By answering a child’s question with a question, a parent can lead the child to the right answer in a way that will not crush his or her playful imagination.

When our children were growing up, Santa Claus was part of the Christmas season. However, he was just one of many gift-givers within the household. Some of the others included Mittens the cat, Pooch the dog, our pig Wilbur, and Henrietta the hen and her four sisters. Although our children understood that all the gifts under the tree could be traced back to Mommy and Daddy, the spirit of Santa Claus found its way into their hearts. Our children understood that truth and because of it, they had a good time with all the “make believe” characters that came with the season.

What parents decide to tell their children about Santa Claus is up to them, but whatever they decide, the first message of the season is that: “Today in the town of David a Savior has been born to you; he is the Messiah, the Lord. This will be a sign to you: You will find a baby wrapped in cloths and lying in a manger.” Suddenly a great company of the heavenly host appeared with the angel, praising God and saying, “Glory to God in the highest heaven, and on earth peace to those on whom his favor rests” (Luke 2:11-14).