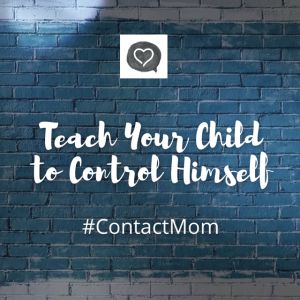 He who is slow to anger is better than the mighty, And he who rules his spirit, than he who captures a city.       Proverbs 16:32

We’ve probably all seen at least one funny video of a toddler throwing a tantrum for the camera…turning on and off the tears as the parent filming hides around the corner. All goes quiet until the little one comes back into view; once he sees that the parent is there, he starts up all over again. Or maybe (like me) you’ve had the opportunity to hold a 3-year-old through a tantrum because there wasn’t a place to isolate him. During the process he became more and more upset that I was holding him still. When I let him know I would let go of him when he stopped screaming, he immediately was calm and quiet.

Children as young as 9 months can be trained to play on a blanket, to keep their hands down while being fed at mealtime, and to start to use basic signs to communicate “please”, “thank you”, “more” or “all done.” We call the capacity to do these things “self-control”. The examples above demonstrate that even very young humans have this ability. The simple definition of self-control from Merriam-Webster is “restraint exercised over one’s own impulses, emotions, or desires.”

As parents, we need to strengthen and encourage self-control in our children because it is a foundational virtue for life. Obedience, focusing, completing a task, sharing, and kindness all rely on some level of self-control.

I always said I was my child’s self-control before he had any. Before the age of reason, children need concrete consequences for when they show a lack of control. As the child is trained and matures, motivations become more and more internalized. Then, my role as the parent is to encourage my kids to ‘find’ their self-control. Just like a muscle, self-control must be exercised and strengthened. Here are some helpful tips for training your child in self-control:

There is great value in taking the time to proactively train our children in the virtue of self-control. By starting young and teaching and encouraging them at each stage of development, we set them up to be successful in all of life because they will have learned to rule their spirits well.

Beth Ann Plumberg and her husband of 37 years, Chuck, have taught parents since 1993. They have 4 grown sons, 4 lovely daughter-in-loves and 5 adorable grandchildren.