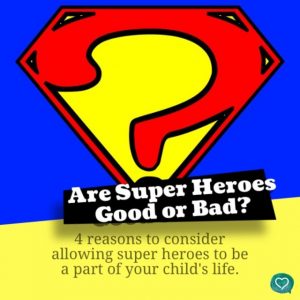 Let’s face it, Mom and Dad.  Superheroes are just plain fun.  They fly, they run, they stop bullets.  What kid does not like pretending they are invincible?  As parents, we are sometimes left wondering, “Are superheroes good or bad?”  Here are four reasons to consider allowing superheroes to be a part of your child’s life.

“Grandma, do you think Superman could get one of those fluffy clouds for me?”  This was the question my seven-year-old daughter asked my mother one day while riding in the car and gazing up at the sky.  This question adequately represents my daughter’s imagination, which was partially fed by having superheroes in her life.  Growing up, she was exposed to Superman cartoons, Larry-Boy, Buzz Lightyear, Super Friends, and the Justice League, and she loved every single one of them.  My kids regularly tied big blankets around their necks and pretended they were flying or running at the speed of light.  As they grew older, they would make superhero costumes for themselves and the dog.  When my daughter was a teenager, she spent a couple of hours painting a Batman mask on her face to create a beautiful work of art.  Recently she told me that she cannot imagine having grown up without superheroes because it was such a key ingredient to the expansive imagination she has today.  Oh, and by the way, today she is twenty-two and a theatre major in college preparing to direct her first play…and still very much in love with Larry-Boy…and Batman…and Superman…and, well, you get the point.

When I asked my superhero-loving daughter what I should say in this blog, she was all too anxious to share her thoughts with me.  What struck me the most was that she said loving superheroes taught her how big God really is.  As stated previously, she loves just about every superhero.  As a child, she daydreamed about superheroes and about becoming a superhero herself.  She confessed to me that she would ask God to give her super powers.  Obviously, He did not answer that request with a yes and for a while that bothered her.  However, when she was eleven years old, she realized that the reason God did not give her super powers was not because He could not.  Rather, He did not give her super powers because it would diminish the significance and meaning of His own power as the one and only God of the universe.  While loving superheroes made her long to leap tall buildings in a single bound and fly faster than a speeding bullet, it also made her realize that no one, real or imaginary, is bigger than God.

My son liked superheroes when he was a small child.  When he was about four years old, he had a Superman costume complete with cape, that he liked to wear – and not just on Halloween.  I could not find a good reason why he should not be able to wear a Superman costume out in public on any ordinary day of the year so I let him.  You know what happened?  My son brought unexpected joy to many of the people we encountered as we were running errands.  Adults knew it was not Halloween but did they care he was wearing a costume?  Nope.  Not one bit.  In fact, it made most people smile.  It made most everyone stop and speak to him and say something sweet and encouraging.  My son brought joy to countless people just because he loved pretending to be Superman while running errands with Mom.  Today, he is probably one of very few seventeen year olds that does not really care for superheroes but he does enjoy bringing unexpected joy into the lives of others; and if it means donning a superhero suit to do it, well, he would be the first to find a phone booth and make a “super”-fast change.

Rooting for the Good Guys

We live in a lost world, which can often feel dark and hopeless.  This is often portrayed in superhero shows and movies, both past and present.  Superheroes are the good guys, the ones trying to right the wrongs, the ones sticking up for the little guy.  This can be a wonderful teaching tool for kids to see that good could and should win over evil.  Superman prevents Lex Luthor from destroying the planet.  Batman brings criminals to justice.  The Super Friends stop the evil world leaders from dominance.  While these issues may be the over-the-top stuff that good stories are made of, we also see Larry-Boy teach the virtues of truth and not spreading rumors.  With superheroes, good, whether make-believe or real, always wins and the world is shown as a better place because of it.

What kind of imagination is building in your child?  Are they learning how big God really is?  Can they bring unexpected joy to others?  Are they rooting for the good guys?  If your answer is no, it just might be time to watch the old Superman cartoon, break out the costumes, and bring a little joy and fun into the crazy world in which we live.

Tricia McDonald is the wife of a newly retired Army Sergeant Major and a mother of three amazing children, ages 17, 18, and 22.  She recently gained a wonderful son-in-law as well.  She currently resides in North Carolina, where she homeschools her two youngest kids.  Tricia enjoys reading and is passionate about U.S. History.  She also volunteers as the music coordinator for a local semi-professional youth theatre group.  She would like to encourage young moms to enjoy each moment, as the years really do fly by quickly.