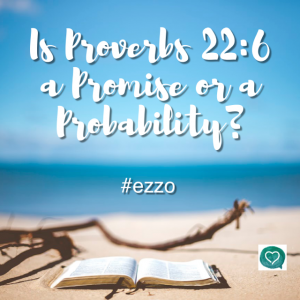 Train up a child in the way he should go and when he is old he will not depart from it. Is Proverbs 22:6 a promise of salvation or an implied probability? Simply stated, it is neither; it is a proverb. A proverb is a statement of general truth which has application for the varying circumstances of life. According to the Bible, King Solomon was the wisest man ever to live (I Kings 4:29). One of the distinguishing traits of his wisdom was his insightfulness into human behavior. The Holy Spirit guided his ability to articulate his observations into Proverbs.

A proverb is communicated in a metaphorical nature and in figurative language. In Proverbs 22:6, Solomon is only stating a truism associated with parenting. He is not declaring assurance onto which some expectation of salvation may be founded. This proverb is similar to others which relate to child-training. For example, Proverbs 10:1 states, “A wise son makes a father glad, but a foolish son is a grief to his mother.” Here is Solomon’s observation: the consequences of either correct or incorrect parenting are manifested in either the wisdom or the foolishness of one’s offspring. There is no promise implied, just a statement of fact. Proverbs 17:25 says, “A foolish son is a grief to his father, and bitterness to her who bore him.” Again, a declaration of truth was derived from observing the emotional struggles and broken hearts of parents whose children had gone wayward.

When we examine Proverbs 22:6, we find a statement of substance and of general truth. In Proverbs 22:6, ‘train’ means to initiate or to prescribe the learning patterns or to cause one to learn, or to set the spiritual patterns for life. By using this word, Solomon is stating that the wise parent will be the one to initiate learning in his child by training him “in the way he should go.”

The phrase “in the way he should go” has two meanings. One is assumed, and the other is implied. According to the context of biblical training, God’s principles and standards are presumed to be the subject matter of the development of a child’s moral character. The text implies that the training done by the parents should reflect their recognition of two factors: the natural way of children and the uniqueness of each child. The natural way refers to those constant factors naturally found in our humanness. “Foolishness is bound up in the heart of a child,” Proverbs 22:15a. “The heart is more deceitful that all else, and desperately sick,” Jeremiah 17:9a. The second factor refers to the uniquely creative bend of each child. In essence, Solomon is suggesting that the wise parent under-stands the nature of children in general as well as the uniqueness of his own child.

The phrase ‘and when he is old’ pertains to the results of parental training. The word old is used to represent an elder in the Hebrew economy. That would be at 40 years of age, the beginning of the wisdom years. ‘He will not depart from it’ refers back to the entire training process. Solomon’s challenge to parents can be wrapped up in this summary: When you initiate godly training in your child in conformity to his nature and uniqueness, the principles instilled within his character will become second nature to him when he matures.

We do not believe the promise of salvation is implied in this verse nor is the notion that a wayward teenager will instinctively return to the innocence of his Sunday School days. What is implied is the weight of parental responsibility in training children. The seeds we plant today in our children’s hearts, whether good or bad, will inevitably bear fruit at a future time.