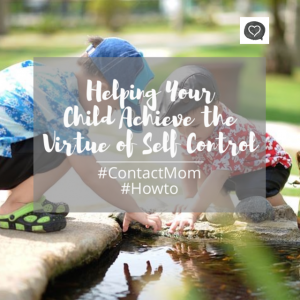 He that hath no rule over his own spirit is like a city that is broken down, and without walls.     Proverbs 25:28

“Self-control: the ability to control oneself, in particular one’s emotions and desires or the expression of them in one’s behavior, especially in difficult situations.” That’s not the most popular or sought-after attribute to be gained these days. We live in an era of “self-expression” and “following your heart”.  Despite what the world and our culture would have you believe, self-control is a gift.  When your child gains mastery over his emotions and his will, he’ll be able to make wise choices based on what’s RIGHT rather than how he FEELS.

If self-control is such an important virtue, when should parents start teaching self- control to their children?

As soon as your child becomes mobile, you can begin to implement strategies of self-control. Teach your crawling baby that there are boundaries that need to be respected and items that shouldn’t be touched, as well as where the appropriate play areas and toys are. This primes your baby to handle emotionally charged situations later on as a toddler, when he’ll be better able to handle a “no” from Mom or Dad even when it makes him upset.

The next tool you can utilize to strengthen self-control is teaching your child to fold his hands. This can begin between ages 18-24 months. At our house, we begin with a copy game of clapping, hands on head, then folding hands. Just as a game. Once you know your toddler knows how to fold his hands and follow these instructions, sit him on a chair and tell him to fold his hands for a couple of minutes a day.  Make it a fun, praise-worthy time. If the child attempts to get down, firmly tell him, “No, you need to obey. Mommy said to stay here.”  After a few days of consistency with this exercise, it will quickly become a normal part of your child’s life.

A child who is used to these times of “quiet hands” will have very few issues when you need to use this in the doctor’s office, the car, the line at the store, etc.  Instruct your preschooler that the reason why we choose to show self-control and use quiet hands in these places is because we want to consider the preciousness of those around us. If we’re loud and out of control, it makes others feel like we don’t care about them, and that’s not how Jesus wants them to feel.

Do you have a sensitive child who struggles with self-control?  Consider these four things when helping your child gain victory over emotional outbursts:

* Time: If your child has thrown a fit, sit him down and wait a few minutes before talking. During those few minutes, take the time to pray to make sure that you’re calm and ready to talk.

* Tone: Remember that a parent who lacks self-control can’t teach a child self- control. More is caught than taught and a child who sees anger, frustration, and complaining from his parent is only going to magnify that behavior. Parents must talk to their child in a controlled, firm way, void of tones that convey a message of disdain for him as a person.

* Speaking to the virtue: Once you have yourself under control, begin to talk to your child about the issue he is facing. Express that the behavior was unacceptable and why, but also elevate the right action and convey your good opinion of him as a person. Give him a high standard to reach for and put in his heart a desire to reach that standard through words that feed his spirit rather than crushing it.

* Consequences: If a child is led to believe that acting upon all of his feelings is okay, he is being set up for failure in his life. Consequences communicate that a total lack of self-control is unacceptable. If left uncorrected during childhood, the person will end up having a hard time holding a job when his employer or co-workers are difficult. His marriage will suffer because lasting true love is an ACTION outside of feelings. He’ll struggle in his parenting to be the example his children need, and so on. So while knowing how to talk to your child in the right time and tone is important, it is even more important that unrestrained emotional outbursts do not go without consequences.

Maybe your child isn’t usually overcome with sadness or anger but doesn’t show self-control when he is excited. Is there such a thing as too much excitement?

Have you ever seen a child go absolutely crazy screaming, yelling, and running because of a gift he just opened? Or a child who screams and cries uncontrollably because he just found out he’s going to Disney World?  There’s nothing wrong with excitement, and showing your appreciation towards the giver is very polite. What isn’t a demonstration of self-control is when a child’s excitement ceases to be thankful toward the giver and instead is fueled by a selfish desire to gain MORE in the future or just to get the attention of those around him. A parent must be able to discern her child’s heart and coach him into harnessing his excitement to be focused on others rather than self. If self-absorbed excitement is allowed to persist, or worse, is encouraged, it will lead to a deep sense of self-centeredness.

As a parent you have the ability to understand the long-term benefits of self-control.  Encouraging self-control now in your child’s life is an empowering gift that will last a lifetime.

Stacy Bullock is a wife and stay-at-home mother of three kids. Married to her high school sweetheart, Joshua, she couldn’t imagine a more fulfilling life. She enjoys playing the cello, horseback riding, and helping other mothers find fulfillment in making their quiver a happy and heavenly home to sharpen and ready their arrows (children) to be launched into the world to glorify God in following His calling on their lives.