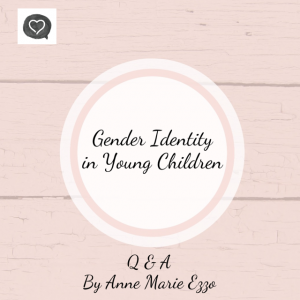 Question: I hope you can help. My sister called me in a panic. She is concerned that her 5-year-old son seems to prefer playing with his sister’s dolls and dress-up clothes. With all the discussion of gender confusion and homosexuality, what should I say to her?

Response: First of all, to put everyone’s mind at ease, young children do not think in terms of gender identity or confusion. For them, their gender is what they see when they go to the bathroom, and they are not confused about it unless a confusing idea is planted in their minds. Encourage your sister not to panic or to speak to her son in fearful tones or communicate that the behavior being displayed is bad, wrong, or not in keeping with his gender. Instead, she needs to encourage her son in his gender role, but do not make his gender so restrictive that not even God recognizes it.

As it relates to gender and gender identity, a parent’s emphasis should not be on prohibiting playing dress-up, but instead making sure to encourage activities that complement the child’s natural propensity. Have him dress up according to his gender. Throw into the dress-up box some of Dad’s or Grandpa’s old ties, jackets, hats, and shirts.

Any parent should not be limited by social traditions that have no biblical validity. Boys can be great cooks, artists, and musicians, and be expert dressmakers (roles society often labels as ‘feminine’). Conversely, girls can be great athletes or carpenters, or wield a chain saw (roles society has traditionally labeled as ‘masculine’). Play activities may reflect a child’s gender, but they do not define it— the child’s brain does. Remember, God designed each gender: “Male and female, did He create them” (Gen1:27). The brain of each gender is uniquely different as well.

For a fuller explanation of this topic and many more, we would recommend enrolling in a Protecting the Innocence of Childhood class through www.GrowingFamilies.Life.

Anne Marie Ezzo serves with her husband in ministering to families around the world through Growing Families International. For the past 30+ years her passion has been, and continues to be, to encourage wives and moms to practically understand what it means to “love your husband and children”.