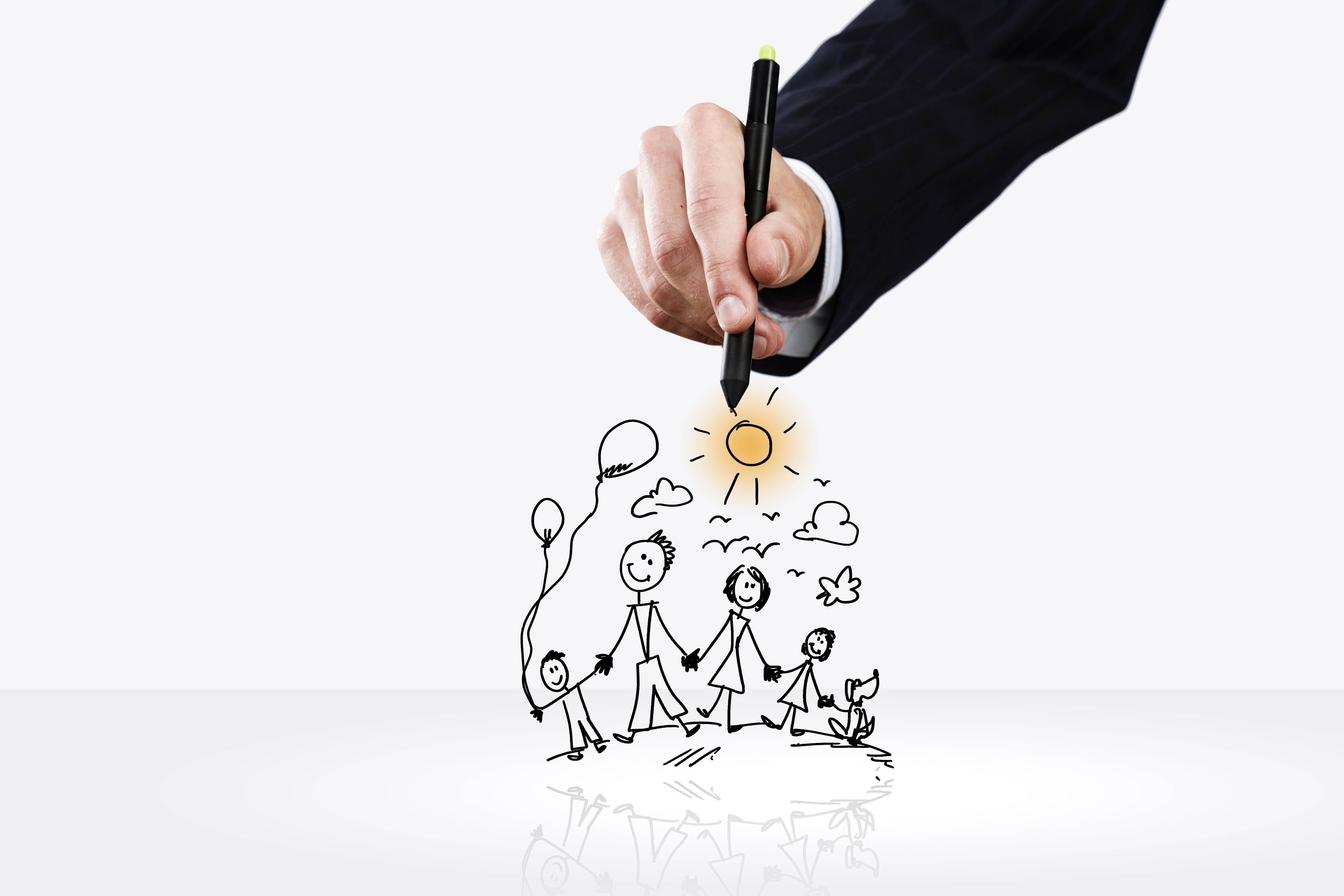 When he can’t say “good morning” in person, a father finds that a simple sketch is worth a thousand words.

Five a.m. Still dark. A soft click from the clock radio, and my last dream of the night surreally segues into the day’s headlines from National Public Radio. In sluggish, automatic sequence, my feet hit the floor, my hand hits the shower spigot, and my toothbrush finds my mouth. Before my five-year-old son, Max, awakens from his dreams, I’ll be hitting rush-hour traffic headed for a special 8 a.m. meeting.

Which means that this morning, right before I leave home and plunge into the grown-up world of big business, I’ll take a couple of minutes to create a silly drawing for Max.

I don’t know exactly when this routine of leaving doodles for Max began – probably when he was two plus change. But I know very well why it started, why it continues and why I’ll likely nurture the tradition well past the point where, inevitably, Max will roll his eyes with that “Dad, I’m, like, way too old for this” expression on his face. On those occasions when work precludes my being there when Max rises, leaving behind a drawing on his place mat at the kitchen table is the next best thing to bidding him good morning in person.

Mind you, the pictures themselves are nothing fancy. They are just the sort of primitive scratching you’d expect form an inartistic, pre-caffeinated papa using whatever writing implements he can find in the morning light without waking up the entire household.

Nor is the subject matter anything art scholars would make much hay of. Mainly, they’re simple, whimsical renderings starring Max himself: sketches commemorating important moments in his young life (his first pair of cowboy boots, his first broken bone, his first ride without training wheels, the recent arrival of his baby sister). Some are anticipation builders for upcoming events like an approaching birthday, holiday, or road trip; or pleasant reminiscences like our vacation on Lake Erie or a recent walk along the shore of our neighborhood pond. Or just wild, boyhood imaginings I know he’ll appreciate (Max riding a dragon, Max aboard a moon-bound rocket ship, Max saving a city from my woefully inept rendering of Godzilla).

However, style and content aside, these off-the-cuff drawings do seem to make it easier for Max to accept my absence on the mornings in question.

“I’m glad for them,” Max said to me once, while patting me on the head. My wife tells me he’s always enjoyed them, even if his expression of thanks has devolved from toddler’s unquestioning anticipation (“Let’s go see what picture Daddy left!”) to a five-year-old’s mild interest (nowadays, Max mainly conveys his appreciation by being disappointed on those few occasions when I’ve forgotten to leave a sketch in my stead).

Without question, they have made it easier for me to pull out of our driveway and into traffic knowing I won’t be there to hear him thump down the stairs in his footie pajamas, to see his tousled hair above a bowl of cereal, or to smell his warm, fresh-out-of-bed morning scent. Call it rationalization, guilt therapy, or what you will, but it feels better than leaving nothing behind but a kiss on his forehead while he sleeps.

Besides, my morning drawings have yielded some nifty, unplanned side effects.

For starters, they’ve opened up a channel of communication between Max and me. Crude as they are, the doodles allow me to reinforce his good behavior, applaud his accomplishments, teach him that imagination counts, or simply to remind him that I love him (typically, with X’s and O’s). Perhaps, and most importantly, the doodles assure him that he is on my mind as I leave each day.

I also make a point of asking Max what he thought of each day’s drawing upon returning at night, which makes them an excellent ice-breaker and far more effective than the standard, “So, what did you learn at kindergarten today?”

Then there’s the fact that we’ve saved most of the sketches. A riffle through the collection (which now numbers 126) suggests that I have managed to document much of Max’s personal history. In effect, these drawings have become a kind of doodle diary, as valuable to us a photo album or a thumb drive of stored digital videos.

In some ways even more so, the sketches are not just a clinical, camera’s-eye record of events as they happened. They are, instead, a history filtered through a dad’s point of view, and as such perhaps more revealing than a file of digital photos. They also memorialize those seemingly small moments that would otherwise have been lost to our family record. (Or so I’d like to think; only time will tell.) And someday, I’ll be passing the stack on to Max as a keepsake and chronicle of his early years.

But not before using it to embarrass him before his first college sweetheart. Of that, I’m sure. 🙂