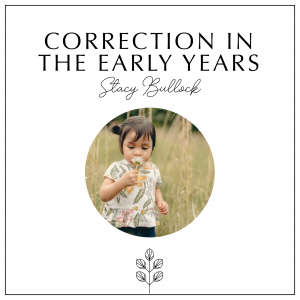 Is it really necessary to correct your crawler/toddler? If so, why? And what does it look like?

Ultimately, our desire for our children is that they would leave the quiver of our home and fly straight to the target that God has planned for them to hit. In order to accomplish this goal, we need to teach them to seek the kingdom of God and His righteousness first.  One way we can encourage our children from an early age to seek His kingdom first is by showing them how to make morally right choices, which will aid them in avoiding so many of the big consequences they could face later in life.

Teaching Your Crawler the Word “No” and “Make a Wise Choice”

When you want to teach your crawler how to obey and what words mean, especially words of urgency, you have to do something that’s going to get his attention. Some pre-toddlers only need to hear a stern tone in your voice while you say, “no touch” and they will obey.  You can then follow-up with, “make a wise choice” and redirect them to something or somewhere that’s acceptable.  Other children may need a hand squeeze or other firmer forms of correction before they will submit.  Every child is different and you, as the parent, need to determine what will most effectively enlighten your child to the world of obedience and making a right choice. Do your best to not frustrate your child through inconsistency or choosing too mild of a consequence, which will blur the lines in his mind about what is the right thing to do.

As parents, we are modeling God’s standards, character, and love to our children. He says in His Word, …To obey is better than sacrifice, and to hearken than the fat of rams. For rebellion is as the sin of witchcraft, and stubbornness is as iniquity and idolatry… (1 Samuel 15:22-23). So if disobedience is rebellion, then we ought to have a sense of urgency as we cultivate the hearts of our little ones to hearken to our instructions now so they will be sensitive to the voice of God later on. Begin as you mean to go. Make sure you say what you mean and mean what you say when you instruct or correct your toddler. God describes rebellion as the sin of witchcraft, and tells us that foolishness resides in our children’s hearts. But God has given us as parents the tools we need to drive that out of them: Foolishness is bound in the heart of a child; but the rod of correction shall drive it far from him. (Proverbs 22:15).

Where Does Correction Lead?

When a crawler/toddler is corrected consistently, he’s being encouraged to have good judgement as he grows older. A toddler who is trained to obedience will grow into an older child who has very few incidences of getting into things he shouldn’t or going places that are off-limits or dangerous. He will become more trustworthy and therefore will be allowed more freedom as he grows in moral maturity.

In conclusion, is it necessary to correct your little one?  Yes.  Why?  So that he/she will grow into one who seeks God’s will and ways throughout his life.  How do you do that?  By starting early, being consistent, and saying what you mean and meaning what you say.  Do this, and your “arrows” will hit the bullseye!  What a great opportunity parents have to influence a soul for God’s kingdom.

Stacy Bullock is a wife and stay-at-home mother of three kids. Married to her high school sweetheart, Joshua, she couldn’t imagine a more fulfilling life. She enjoys playing the cello, horseback riding, and helping other mothers find fulfillment in making their quiver a happy and heavenly home to sharpen and ready their arrows (children) to be launched into the world to glorify God in following His calling on their lives.